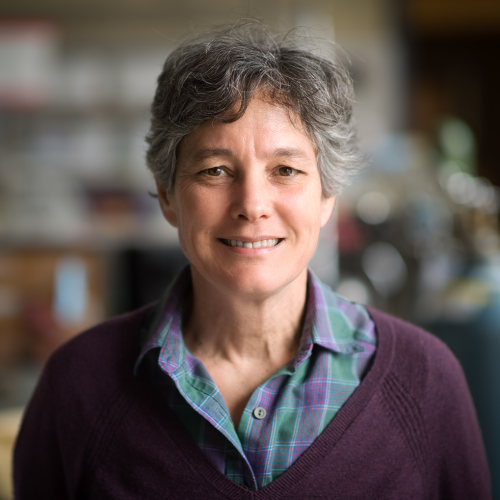 Elizabeth Edwards received her Bachelor’s (1983, with honours) and Master’s (1985) in Chemical Engineering from McGill University. From 1985-1988, she worked at J.E. Seagram & Sons in Québec, where she improved yields in their cooking and fermentation processes. She completed her PhD (1993) in Civil and Environmental Engineering at Stanford University, where she discovered novel pathways for contaminant transformation in groundwater. In 1992, Edwards joined Beak Consultants in Guelph, ON, where she and her colleagues were the first to show that chlorinated solvents could dechlorinate to non-toxic ethene naturally in groundwater. In 1995, she won an NSERC Faculty Award and joined the Department of Chemical Engineering at McMaster University. In 1997, she joined the Department of Chemical Engineering and Applied Chemistry at U of T. She has been cross appointed to the Department of Cell and Systems Biology since 2002.

Professor Edwards has achieved international recognition for her pioneering research on anaerobic bioremediation of recalcitrant pollutants and the application of genomic technologies to discover new functions in anaerobic microbial communities. Over the past 25+ years, her research team has discovered and characterized novel microbial processes that affect the fate of pollutants in the environment. Professor Edwards also developed a microbial culture called KB-1, dominated by unusual organohalide-respiring bacteria, which proved to be an effective low-cost solution for cleaning up industrial sites contaminated by chlorinated solvents. The KB-1 consortium is now widely used commercially around the world, sold via SiREM, a spin-off company based on her research founded in 2002. Edwards is also co-founder (2014) of Savant Technical Consulting, which provides biotechnology, regulatory and life cycle assessment analysis and advice.

At U of T, Edwards oversees two multi-disciplinary research networks: BioZone, which includes nine principal investigators from across U of T Engineering, and the Industrial Biocatalysis Network, which involves researchers from U of T, the University of British Columbia, Concordia University and several industry partners. Both networks envision using microorganisms to address a variety of challenges, from renewable plastics to less expensive pharmaceuticals to energy-from-waste.

Professor Edwards has published over 120 peer-reviewed journal articles, and many government and industrial reports, book chapters and conference papers. She has an H-index of 47 and over 8,000 citations. Her invited talks range from the highly technical to those intended for a general audience. A sought-after reviewer, she serves on the editorial board of Applied & Environmental Microbiology, the most cited journal in the Microbiology, Biotechnology & Applied Microbiology categories.

Professor Edwards is a dedicated mentor to students at all levels. She has graduated 18 PhD and 37 Master’s students to date with an outstanding track record of career placement in academia and industry. Elizabeth Edwards’ research accomplishments have been recognized with several prestigious awards, including an Ontario Premier’s Research Excellence Award (2003), a Killam Research Fellowship (2008), a Shimizu Visiting Professorship at Stanford (2009), a NSERC Synergy Award for Innovation with Geosyntec Consultants (2009), the Kalev Pugi Award from the Society of Chemical Industry Canada (2010), and the Ontario Professional Engineers Medal in Research and Development (2011). She is a Fellow of the American Association for the Advancement of Science (2011), the Canadian Academy of Engineering (2011) and the Royal Society of Canada (2012). In 2014, Edwards was awarded a Canada Research Chair (Tier 1) in Anaerobic Biotechnology. In 2016 she garnered the Killam Prize in Engineering – Canada’s most prestigious engineering award. In 2017 she received the U of T Faculty Award, for excellence in both teaching and research.